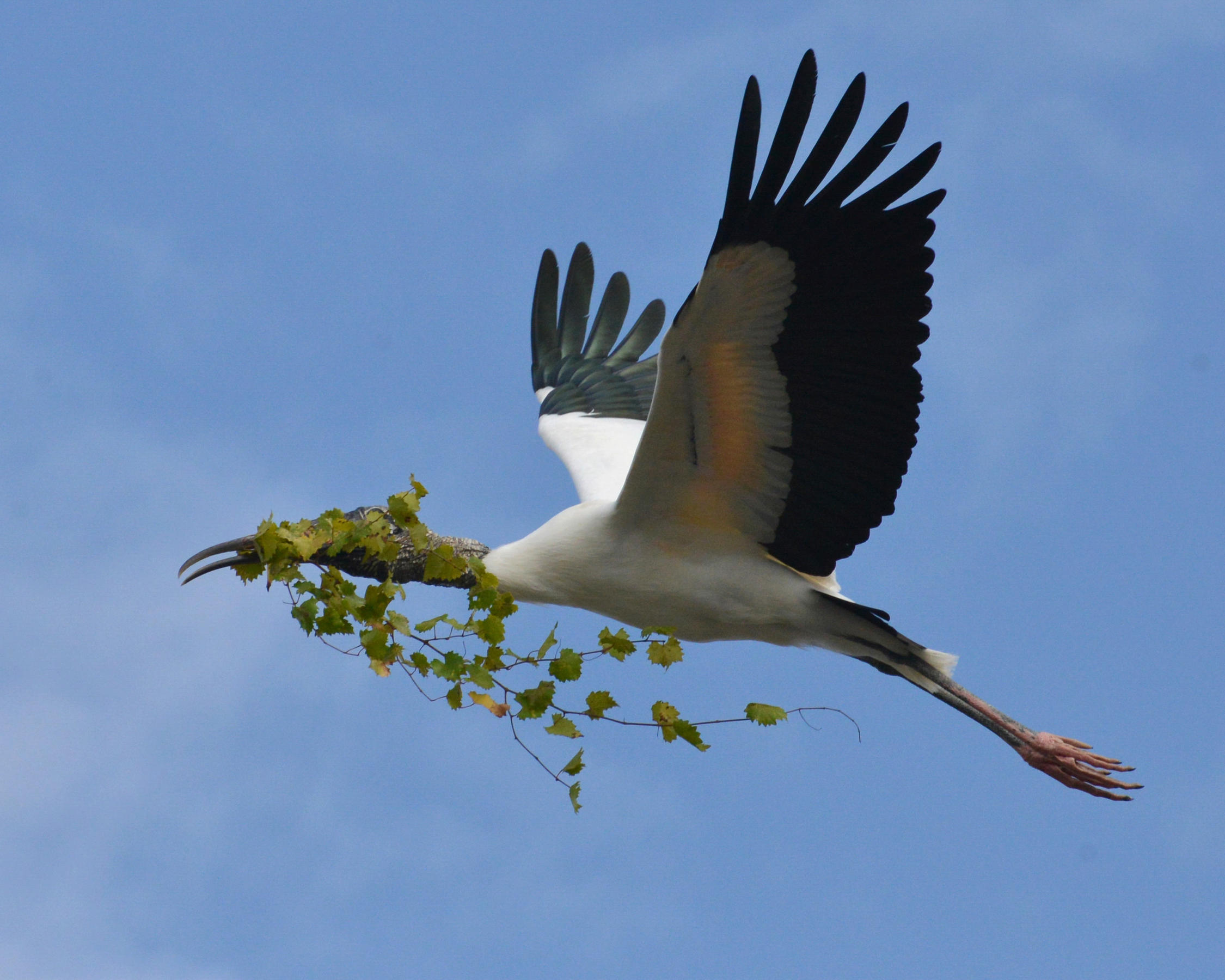 Our only native stork in North America, the Wood Stork (Mycteria americana), is a very large, heavy-billed bird that wades in the shallows of southern swamps. The Wood Stork population in the southeastern United States was estimated at more than 150,000 at one time, but breeding populations in southern Florida have dropped sharply since 1970. By the early 1990s, Wood Storks’ overall numbers had plummeted to around 10,000. Since then, their breeding range has shifted northward into coastal areas of Georgia, South Carolina, and North Carolina. Destruction of habitat and disruption of water flow through southern Florida are major causes of decline.
Wood Stork with nest material. Photo: Howard Izenwasser
News

Our only native stork in North America, the Wood Stork (Mycteria americana), is a very large, heavy-billed bird that wades in the shallows of southern swamps. The Wood Stork population in the southeastern United States was estimated at more than 150,000 at one time, but breeding populations in southern Florida have dropped sharply since 1970. By the early 1990s, Wood Storks’ overall numbers had plummeted to around 10,000. Since then, their breeding range has shifted northward into coastal areas of Georgia, South Carolina, and North Carolina. Destruction of habitat and disruption of water flow through southern Florida are major causes of decline.

Wood Storks nest in colonies. While they prefer stands of tall cypress, they also sometimes nest in mangroves or on trees in flooded impoundments. Nests are nearly exclusively found in trees on small islands or trees that are inundated by standing water, as the presence of alligators has been shown to deter nest predators, like raccoons, which are a threat to eggs and young chicks. Nesting storks have been known to fly more than 50 miles one way in search of food.

What do Wood Storks eat?

As tactile feeders (birds that feed by touch), Wood Storks select their feeding location by preferentially selecting pools with high densities of fish. Wood Storks primarily eat fish between one and ten inches long. Depending on the time of year and feeding location, Wood Stork diet can also contain a large proportion of crayfish. It takes an estimated 440 pounds of food over the 13-week nesting season for a pair to successfully fledge chicks.

When do Wood Storks typically nest at Corkscrew?

Since the late 1950s, nesting has begun at Corkscrew as early as mid-November. From the 1960s to 1990s, the average date of nest initiation gradually moved from December to February, which was accompanied by a significant drop in productivity. In recent decades, however, the average date of nest initiation has moved back into December, but fewer Wood Storks are choosing to nest at Corkscrew. The latest nest initiation date recorded was April 1 (in 1994) but nests were not successful. Chicks must be fledged before water levels rise at the start of the rainy season, making late nesting efforts risky and mostly unsuccessful.

How are nesting efforts impacted by rain and water levels?

Wood Storks feed by touch (a process called “tactilocation”), partially opening their bill and snapping it shut when fish brush against it. Wood Storks’ bill snap is one of the fastest reaction times recorded in vertebrates, and they are highly efficient when prey are heavily concentrated in shallow water. Over the course of the dry season, water levels in South Florida can drop more than four feet. This gradual, seasonal drop in water level concentrates fish in deeper pools where they become readily available for wading birds, alligators, and other predators. A rise in water levels (during the wet season or a large rainfall event during the dry season) disperses fish across the landscape, spreading them out and making it more difficult for birds to find food. Without consistent access to prey items throughout the breeding season, Wood Storks cannot feed and fledge their young.

How many nests have Wood Storks typically made at Corkscrew in relation to the rest of the region?

In the 1960s, an average of 10,000 nests were recorded annually for Wood Storks in the entire U.S., with more than 3,300 of those nests recorded at Corkscrew. This accounted for roughly 30 percent of all nests in the U.S. In the 2000s, while Wood Stork nest figures nationwide were estimated at nearly 8,000, only 600 of those nests were counted at Corkscrew during any given year.

The Wood Stork is listed as a threatened species by the U.S. Fish and Wildlife (downlisted from endangered in 2014). They are also protected by the U.S. Migratory Bird Treaty Act.

How many nests have been counted at Corkscrew in recent years?

In the 2018 nesting season, 250 Wood Stork pairs nested at the sanctuary. In 2019, there were only two chicks fledged from the Corkscrew colony.

Why are there fewer birds nesting at Corkscrew?

Audubon scientists believe the two primary causes of Wood Stork decline at Corkscrew are the overdraining of wetlands and loss of foraging habitat due to regional wetland loss. In addition, over the past 20 years, water levels at the Sanctuary have been anything but consistent. The research team believes the water level inconsistency is likely due to some combination of increased demand for water across the watershed, water management activities necessitated by flood control, and changes in plant communities that increase evapotranspiration rates.

While Corkscrew’s altered hydrology is still an issue (and is currently being investigated through a new hydrologic modelling effort), reduced Wood Stork nesting at Corkscrew this year is mostly likely due to this year’s unusual weather. Significant rainfall events in December (and then again in January) raised swamp water levels, reducing food availability for Wood Storks during the time they were considering nest initiation. Wood Storks can initiate nesting at any point during the dry season, but the success of those nests is dependent upon their ability to fledge young prior to the start of the summer rainy season.

Where can I find more information about Wood Storks?