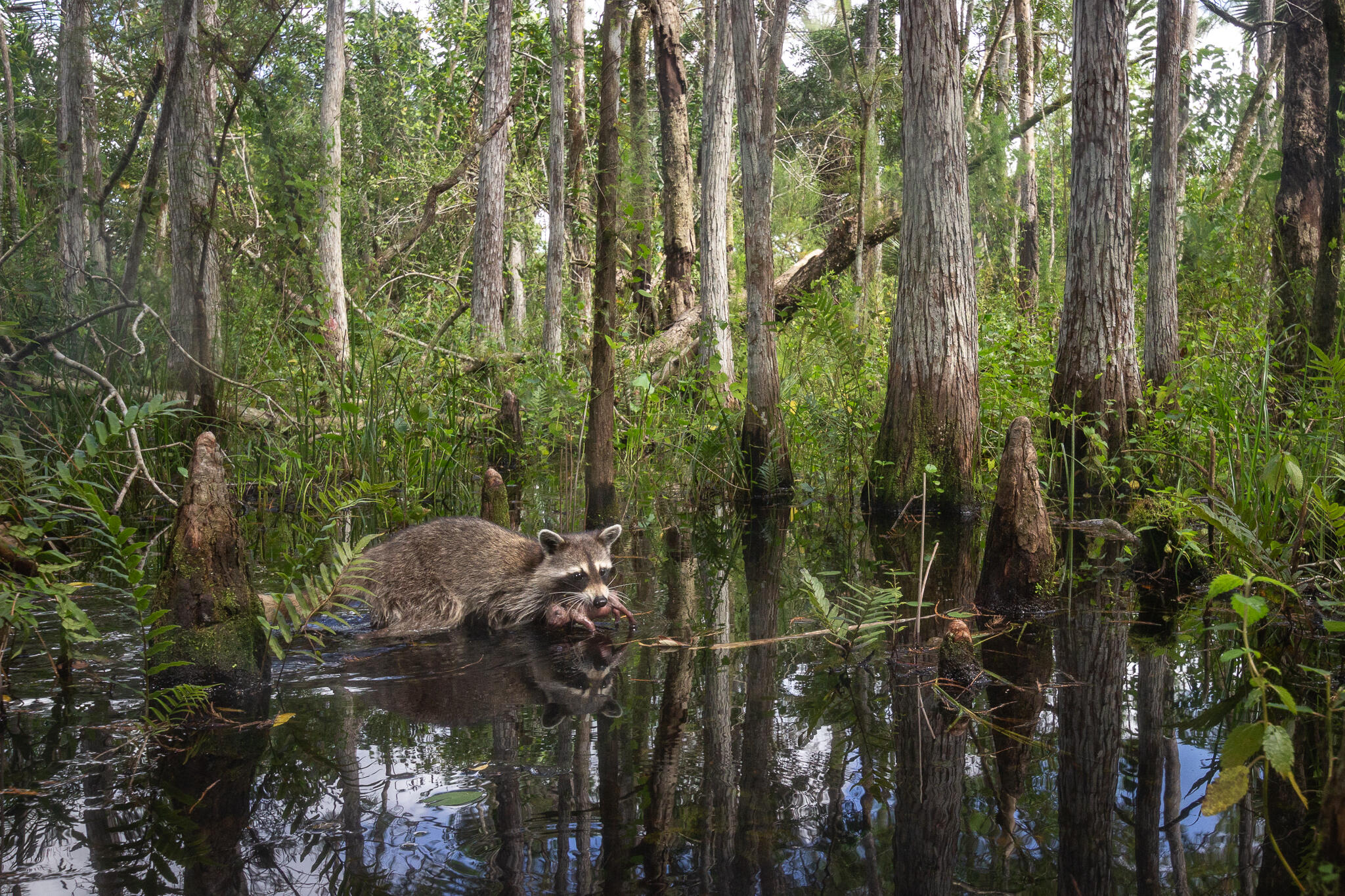 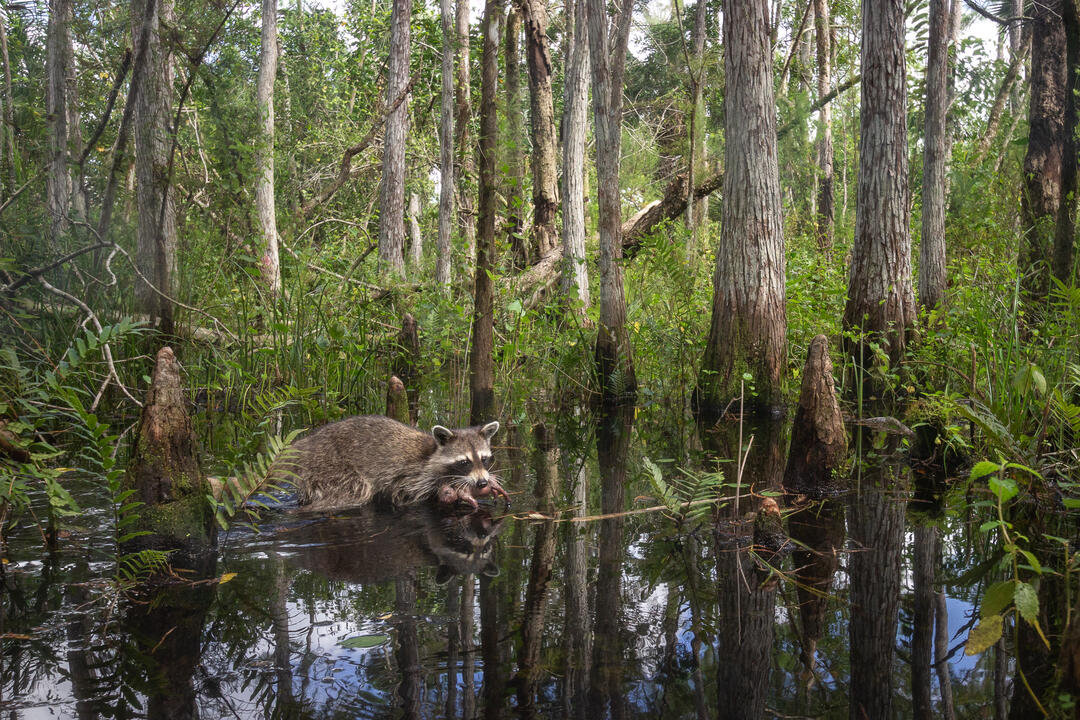 NAPLES, FL –  Illustrating the challenges faced by wildlife in our dynamic sub-tropical swamp ecosystem is no easy feat, but photographer Mac Stone’s image from Audubon’s Corkscrew Swamp Sanctuary does just that. His was one of a record-breaking number of entries, submitted by professional and amateur photographers from 95 countries, chosen by the Natural History Museum in London for their 57th annual Wildlife Photographer of the Year exhibition. The awards are considered to be the Oscars of the wildlife photography world.

Stone’s subject, an adult raccoon carrying a newborn kit through water, shows how difficult it can be for native wildlife to live in the swamp with its dramatic seasonal rise and fall of water levels. While these species have evolved here and are well-equipped to survive, they still need to get creative when Mother Nature throws a curveball.

Before Stone submitted his image, he worked with Shawn Clem, PhD, Director of Research for the Sanctuary, to help interpret what was happening in the image.

“Mac and I spent some time looking at the rainfall and water level data and talking about the timing of the photo, and it seemed a pulse of rain late in the wet season must’ve caught this presumed mama off guard,” said Clem of the October 2020 image. She determined that in the week prior to the image, the swamp received nearly four inches of rainfall, causing water levels to rise significantly in just two days.

“Endless, unseen narratives play out in these old-growth swamps and camera traps offer us a way to see behind the scenes," said Stone. "I was floored when I found this tender moment on my camera because it shows the incredible challenges that our native wildlife face in order to survive in the Everglades. This subtropical ecosystem is also hard on camera equipment; only a few weeks later a tree fell on this camera, destroying it but fortunately the images survived,” he added.

Florida wildlife is facing double jeopardy in the coming decades. Human activities have significantly reduced the quantity and quality of wildlife habitats across Florida, while our changing climate is predicted to make rainfall patterns more inconsistent. These factors, both individually and combined, will certainly make life in the swamp even more challenging.

The 100 winning images, along with the two grand title winners, were announced during a virtual awards ceremony, broadcast live from the Museum's famous Hintze Hall, on October 12. The exhibition will be displayed alongside insights from Museum scientists and experts in 2022, with a goal of leaving visitors with a deeper understanding of the issues facing nature and the actions we need to take to protect it.

Stone is a former Audubon employee. This image is part of a body of work supported by the National Geographic Society. Learn more about Mac Stone's work.

Audubon’s Corkscrew Swamp Sanctuary, recognized as a Wetland of International Importance by the Ramsar Convention and a Wetland of Distinction by the Society of Wetland Scientists, has been an Audubon-protected site for more than 100 years. It conserves over 13,000 acres, including the world’s largest remaining, old-growth bald cypress forest. An estimated 100,000 visitors annually explore the Sanctuary’s 2.25 miles of boardwalk through ancient forest and marsh habitat. Memberships and donations provide crucial support for conservation work at the Sanctuary. 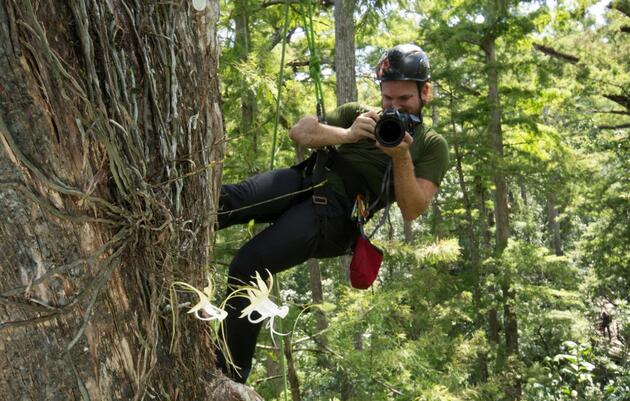 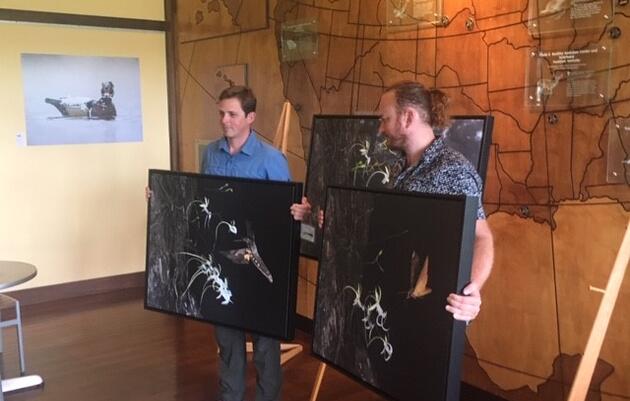 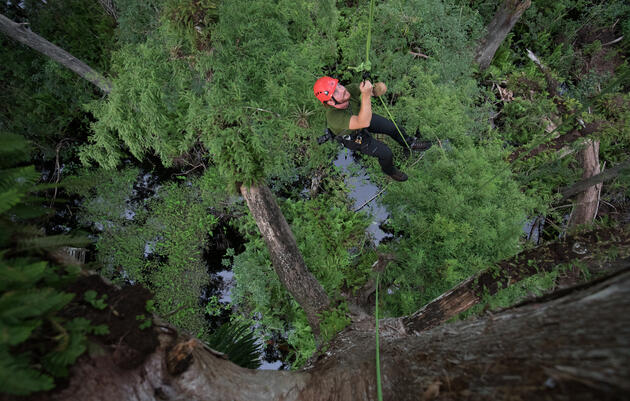 A scientific paper published on ghost orchid pollination was one of the most downloaded papers in 2019.